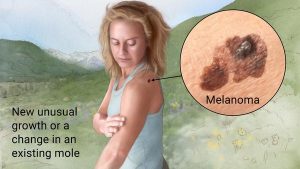 The most dangerous form of skin cancer, these cancerous growths develop when unrepaired DNA damage to skin cells (most often caused by ultraviolet radiation or tanning beds)triggers genetic mutations that lead the skin cells to multiply fast and form malignant tumors. These tumors originate in the pigment producing cells called melanocytes in the basal layer of epidermis. Melanomas look like moles. The majority of melanomas are black or brown, but they can also be skin colored, pink, red, purple blue or white. Melanoma is caused mainly by intense sun exposure, frequent sunburns, especially in those who are genetically predisposed. Melanoma kills 10,130 people in US per year.

Anyone who has more than 100 moles is at higher risk for melanoma. The first signs can appear in one or more atypical moles.

There are four basic types.

What are the risk factors?

Increased risk come with sun exposure, lots of moles on the skin, and genetics.

How to prevent melanoma?

Use broad spectrum sunscreen with SPF 30 or higher. Seek shade. Do not burn, avoid tanning beds, cover up. Reapply sunscreen after swimming.

See a dermatologist as soon as you suspect something or for a yearly skin check up.

4 Skin Conditions That Should Compel You To See Your Dermatologist Quickly Oct 15, 2021
Dermatology Basics: 5 Signs That Mole Might Be Cancerous Sep 11, 2021
Orlando Dermatologist: Back to School Skincare. Jul 10, 2021